Pollak: Trump, as Always, Is Fighting, as Promised - 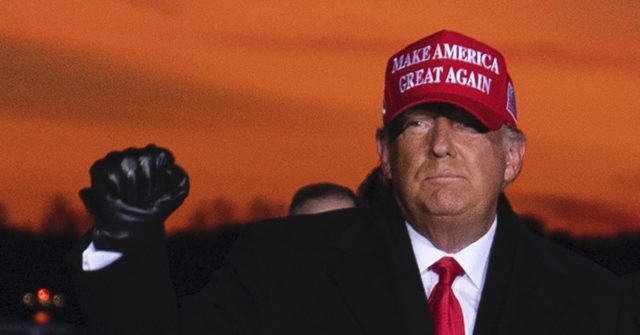 President Donald Trump is doing exactly what he promised his supporters he would do by fighting for every possible legal way to win the election.

His opponents — the media, Democrats, Never Trump — say that Trump is living down to their worst expectations of him, that by refusing to accept defeat he is vindicating their hatred of him.

They are right about only one thing: this is the same Donald Trump we knew all along, and his tenacity is how he became an extraordinary president.

Throughout his career and his presidency, Trump has set goals and done everything he could, within the law, to achieve them. He accepts defeat, but never gives up.

For months, he has been telling anyone who will listen — and his opponents clearly do not — that he will leave office if he loses. Just last week, he said he’d “do the right thing” if he lost. He simply refuses to accept he has lost until all the legal votes are counted and the last gavel has come down in the last court of appeal.

Peggy Noonan says Trump is damaging the country by continuing to fight. Did she tell Democrats they were damaging America by filing hundreds of lawsuits to change voting procedures in the middle of an election, taking advantage of a pandemic to force vote-by-mail in places it had never been used before?

Did she understand, as California Republicans did, what winning on Election Day and then losing when the late ballots come in would do to public confidence in our elections?

The worst damage is being done by our pundit class, who keep telling the public that the president is attempting a coup by going through the legal process.

It is they who promoted “Russia collusion,” the Mueller investigation, and the impeachment scam, while the FBI destroyed civil liberties and the Deep State undermined the Trump administration for the better part of four years. It is Trump who is standing for the rule of law, and his opponents who once again stand for exactly the opposite.

Was it not Hillary Clinton who told Joe Biden not to concede the election “under any circumstances”?

If “projection” is a tactic, Democrats are its masters.

Adam Schiff, who lied to the country for years about Russia collusion, then lied about his contact with the “whistleblower” who triggered impeachment, now complains that Trump is undermining the “peaceful transition of power.” CNN, who gave James Clapper and Andrew McCabe contributorships after their role in the Russia hoax, now protests that Trump is “sabotaging” the new administration by digging in his policies and personnel.

When Democrats and the media tell us that Trump is undermining democracy by fighting for every vote, they are also attacking Trump supporters. Indeed, the attacks have become more explicit on social media: Hollywood celebrities who worshiped at Barack Obama’s feet tweet about Trump’s “deathkkkult.”

Conservatives, who adore the Constitution first and foremost, will be the first to abandon Trump if he goes beyond the legal process. And they haven’t, because he hasn’t.

The idea that any of Trump’s critics would have applauded him for delivering a nice concession speech on Election Night is delusional. Joe Biden, calling for “unity,” can’t even bring himself to denounce recent violence against Trump supporters and threats against Trump’s lawyers. House Democrats and New York prosecutors keep vowing to continue politically-motivated investigations against the president, regardless. It is banana republic behavior — and enthusiastically endorsed by the media.

If Trump had given up without a fight, the media would be plastering the Internet stories from disillusioned Trump voters, telling us that they had been abandoned, that a con man had taken them for a ride and then disappeared when the going got tough.

Instead he is doing — as always — exactly what he promised to do, which is also the minimum Democrats demand of their candidates.

Nearly half of Americans — including a third of Democrats! — believe the election was stolen. We have a legal, judicial, and constitutional process, and Trump intends to use it until he can’t anymore.

That is who we elected in 2016 — the man who, after losing the Iowa caucuses, congratulated his opponent graciously, then spent months calling him “Lyin’ Ted” until new battles, and common enemies, brought them together.

Joel B. Pollak is Senior Editor-at-Large at Breitbart News and the host of Breitbart News Sunday on Sirius XM Patriot on Sunday evenings from 7 p.m. to 10 p.m. ET (4 p.m. to 7 p.m. PT). His newest e-book is The Trumpian Virtues: The Lessons and Legacy of Donald Trump’s Presidency. His recent book, RED NOVEMBER, tells the story of the 2020 Democratic presidential primary from a conservative perspective. He is a winner of the 2018 Robert Novak Journalism Alumni Fellowship. Follow him on Twitter at @joelpollak.