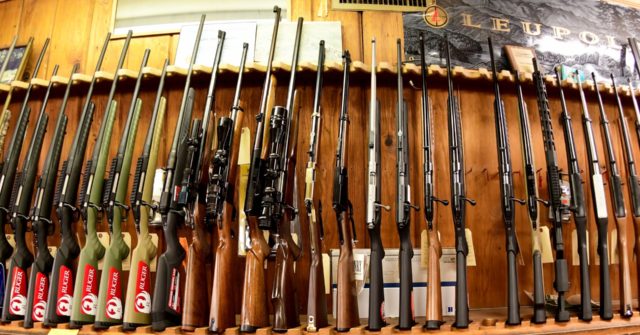 We talked with George Urmston, owner of Phoenix, Arizona’s Cave Creek Guns, and focused on Biden’s proposed taxes of $200 on AR-15 rifles, and on any other rifle deemed an “assault weapon” by Democrats, as well as the $200 tax Biden is proposing for “high capacity” magazines.

What would these taxes mean for Arizona gun owners?

What would they mean for Arizona’s gun-friendly culture?

Joe Biden’s gun control proposals include supporting legislation to limit Americans to purchasing only one firearm a month. https://t.co/QuyrhDQ9hY

Urmston said first off, those taxes would make it impossible for small businesses like his to do business. He continued:

People are already paying an elevated price for guns and accessories, due to basic supply and demand. The demand for guns right now is through the roof and the supply is not sufficient to keep up with demand. So people are sometimes paying an astronomical price just to get the peace of mind the Second Amendment provides. Add a $200 tax to a rifle already in high demand and that would put an immediate damper on business.

Urmston sounded the alarm along with a call to action, predicting those gun controls would erase Second Amendment rights. He added:

[It] would erase our freedoms and liberties, from the inside. Biden and his administration would hit us where it hurts, would constrict our ability to produce and supply Americans the freedom that they are allowed. And this is not like past elections, these people are getting smart. They are literally focusing their energies on taking away our freedom.

Urmston said 30 percent of gun purchases at his store this year have been made by first-time buyers.

And he draws confidence from those new gun owners, noting how gun ownership could transform voting habits and bring new gun voters to the polls next week.

Joe Biden is pushing gun control and stressing there is no justification for magazines that hold “50, 60, 100 bullets.” https://t.co/GKVVjRWuv1

He said, “As far as Arizona goes, we have this mass influx of people from California. They are coming here and they continue to vote the way they did to ruin their state. But what can change that is the fact that we have so many first time gun buyers flooding into our store. And when they come in, concerned over civil unrest, you can see this fear in their eyes. You see this look, like they’re fully exposed. So we not only sell them a gun, but we would send them with firearms instruction and information on instructors. They would come into the store a few weeks later and they exuded a confidence that you cannot believe, and that was from the peace of mind that they got from being able to protect their families.”

AWR Hawkins is an award-winning Second Amendment columnist for Breitbart News, the host of the Breitbart podcast Bullets with AWR Hawkins, and the writer/curator of Down Range with AWR Hawkins, a weekly newsletter focused on all things Second Amendment, also for Breitbart News. He is the political analyst for Armed American Radio. Follow him on Twitter: @AWRHawkins. Reach him directly at awrhawkins@breitbart.com. Sign up to get Down Range at breitbart.com/downrange.