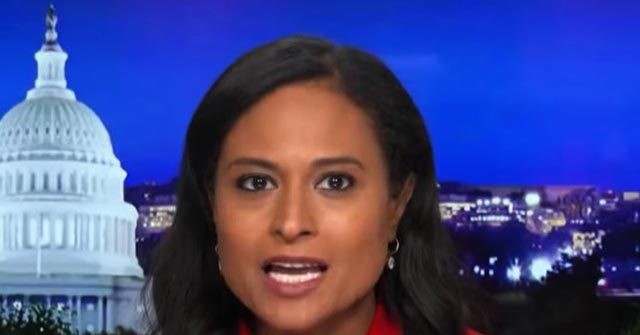 The corrupt Commission on Presidential Debates (CPD) chose NBC’s Kristen Welker, who has twice — twice! — registered as a Democrat to moderate the upcoming debate between President Trump and Joe Biden.

Welker’s been a White House correspondent at far-left NBC News since 2011.

Why is it so difficult for the CPD to get this right?

The CPD is not even trying to hide its desire to rig this election.

The choice of rabid Trump hater Chris Wallace was, on its face, a deliberate set-up that played out exactly as anyone who is aware of Chris Wallace’s lies, unprofessionalism, and conspiracy-mongering expected.

And then, in order to damage Trump, to label him as some sort of Coronavirus Superspreader, and without even consulting the Trump campaign, the CPD just up and announced the second debate would be a virtual debate. The CPD ignored the science — there was no doubt Trump would be corona free in time for the debate — to damage the president.

Oh, and for its second debate moderator, the CPD chose C-Span’s Steve Scully, a liar and a cheat who interned for Joe Biden and who was in active communication, in active collusion with anti-Trump activists.

And Scully is a man of such low character, after he got caught coordinating with anti-Trump activists, he up lied about it, a lie the CPD helped spread, — an audacious lie about being hacked.

And now, for debate number three, the CPD chose a moderator who has twice registered as a Democrat.

It’s not as if we don’t already know Welker is a far-left activist. Anyone who watches her neurotic cable news segments knows what she is, and the fact she felt the need to deactivate her Twitter account should have been an automatic disqualifier to moderate a debate.

Good grief, a presidential debate moderator actively engaged in a cover-up of her own tweets.

Watch her give the Hillary Clinton campaign a heads up on the questions she’s about to ask here.

So no, the news here that Welker is a twice-registered Democrat has nothing to do with her and everything to do with a corrupt Commission on Presidential Debates that is actively seeking to rig this election and must be dismantled and destroyed before it is allowed anywhere near 2024.