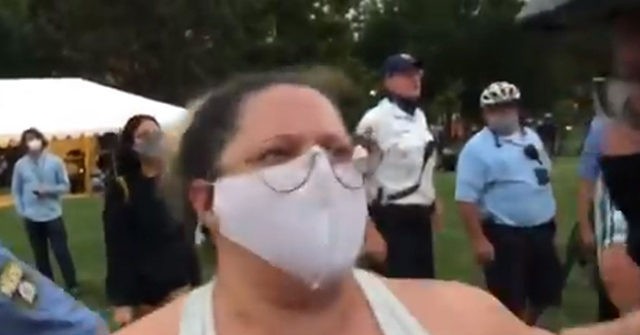 A woman clashed with a street preacher during Tuesday evening’s Black Lives Matter (BLM) protest in Philadelphia, calling him a “fucking racist dirty c*nt” as he told her to “stop being a lesbian” — She also screamed at a police officer in close proximity to his face, ignoring the social distancing rules championed by progressive leaders, yet commonly disregarded by BLM protesters.

“Fucking racist dirty c*nt,” a woman repeated four times as she clapped, directing the insults to a man identified as a street preacher and ending her spiel with a “yeehaw.” Another angle of the video shows her shouting “racist” as he told her to “stop being a lesbian”:

PHILADELPHIA: “f*cking racist dirty f*ck” a white BLM protester yells at street preachers after he told her to “stop being a lesbian” on his megaphone pic.twitter.com/3mJRmr4QwB

PHILADELPHIA: A very disturbed woman chanting a “f*cking racist dirty c*nt” to a street preacher as her skin jiggles and wiggles pic.twitter.com/v6Qd9Tu9li

Another video shows the same woman screaming in the face of a Philadelphia police officer, who just shook his head:

The scenes are just a few of many that unfolded in Philadelphia on Tuesday evening, as protesters took to the streets in response to President Donald Trump participating in a town hall event in the city. Protesters blocked traffic, stood on bus stops, and chanted in the streets. One demonstrator could be heard declaring that the Electoral College “look[s] like a red carpet for the KKK”:

“the electoral college look like a red carpet for the KKK”

“We gon’ abort that ignorance” pic.twitter.com/iI1jg8tzDA

PHILADELPHIA: Hundreds of BLM march in the streets w/ no social distancing, condemning Trump for being anti-science in the way he handled the “pandemic”

By definition these protesters are violating all scientific federal & local recommendations for how to handle the “pandemic” pic.twitter.com/zxQ1GARF97

PHILADELPHIA: A transgender BLM activist in black booty shorts rides a bike and leads the protesters

Earlier in the night this person called all Trump supporters devil worshippers pic.twitter.com/bvjs9GYDtg

The Blaze host and reporter Elijah Schaffer captured a video showing a stark contrast between the BLM protesters and a group of Christians in the area, who calmly held hands and prayed in the midst of the chaos as BLM demonstrators continued to hurl expletives toward the police, and Trump, throughout their night of protest:

PHILADELPHIA: a Christian group stands in a circle and prays for the city in front of town hall

The difference between the two groups is astounding. One is negative, one is positive pic.twitter.com/rZ0Lxs0ovc