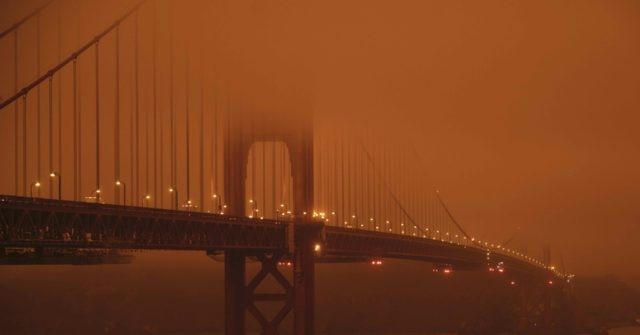 Smoke from the ongoing wildfires on the West Coast has blown across the continent and has now reached East Coast cities — albeit at high altitudes that do not affect air quality near ground level.

Wildfire smoke from the enormous fires blazing on the West Coast has made its way to the East Coast, bringing hazy conditions for the next few days, meteorologists said.

A large-scale weather pattern with a ridge of high pressure blew smoke from blazes in California, Oregon, and Washington across the country and into East Coast cities including New York, Boston, Philadelphia and Washington D.C., according to the National Oceanic and Atmospheric Administration.

The smoke in the New York City area was largely suspended at about 30,000 feet above ground as of 10 p.m. EST [Tuesday], said John Murray, a meteorologist with the National Weather Service’s New York City office. In Northern Connecticut, smoke was reported at about 25,000 feet, Murray said.

The wildfires have burned across parts of California, Oregon, and elsewhere, creating hazy and smoky conditions for days in several cities, especially the San Francisco Bay Area.

Some of the fires were ignited by late-summer lightning; others were caused by accidents or arsonists.

There is ongoing debate about the reasons for the intensity of the wildfires, beyond general agreement that forests have been mismanaged. The environmental regulations of recent decades have prevented or slowed the thinning of forests to remove trees that provide fuel for large wildfires. In addition, a focus on fire suppression over the past century has left accumulated material in forests that burns quickly when fires start.

Scientists have warned that climate change could bring longer dry seasons, and many politicians have claimed for years that climate change has been the cause of recent wildfires, though experts have cautioned against what they call “noble-cause corruption” — the abuse of science for the otherwise “noble” political motive of saving the environment.

Joel B. Pollak is Senior Editor-at-Large at Breitbart News and the host of Breitbart News Sunday on Sirius XM Patriot on Sunday evenings from 7 p.m. to 10 p.m. ET (4 p.m. to 7 p.m. PT). His new book, RED NOVEMBER, tells the story of the 2020 Democratic presidential primary from a conservative perspective. He is a winner of the 2018 Robert Novak Journalism Alumni Fellowship. Follow him on Twitter at @joelpollak.

← Delingpole: No, the Western Wildfires Weren’t Caused by ‘Record Heat’ Gaza Terror Rockets Rain Down on Israel in Wake of UAE-Israel-Bahrain Peace Deals →