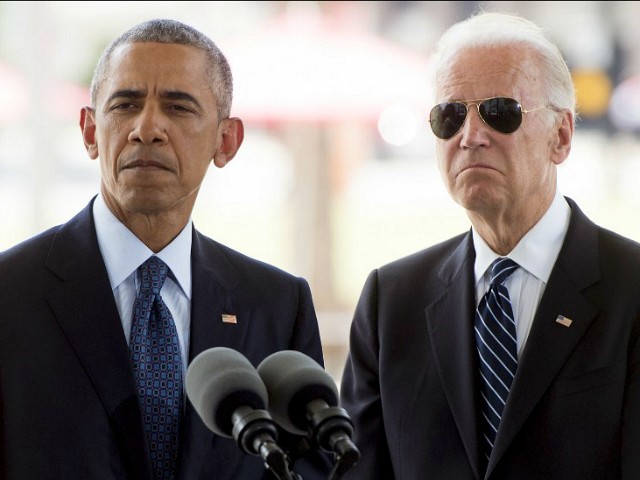 In an interview published Wednesday, Biden said, “Surplus military equipment for law enforcement — they don’t need that. The last thing you need is an up-armored Humvee coming into a neighborhood. It’s like the military invading; they don’t know anybody. They become the enemy. They’re supposed to be protecting these people.”

“Is someone actually running against Joe Biden as far as the presidency is concerned?” asked Johnson, offering her reply as a guest host on Wednesday’s edition of SiriusXM’s Breitbart News Tonight with host Rebecca Mansour. “These are statements that should be thrown back in Biden’s face immediately. When they talk about militarizing of the police, no administration did more to militarize the police than the Obama administration.”

“In 1997, Congress added a section to a defense appropriations bill. And this was set up so that they could transfer surplus military gear to local and state police departments,” stated Johnson. “Under Obama, [in] fiscal year 2011, they said that this was the most productive year in the program’s history, where they moved over $500 million worth of property.”

Wired reported on the 1033 program, added in 1997 to the National Defense Authorization Act, which allows the Pentagon to transfer equipment to local authorities, who pay shipping costs.

“[The Obama administration] used this section of the defense appropriation bill to transfer that military armament from Iraq to local and state police departments,” Johnson added, “and they did it under the idea that they could prevent terrorism — or at least that’s what was said.”

In 1988, Congress created a new federal crime-fighting program called the Byrne grant, named for Edward Byrne, a New York City narcotics officer killed by a drug dealer. Over the years, these grants have created multi-jurisdictional anti-drug and anti-gang task forces all over the country. Because these task forces usually cover more than one jurisdiction, they often aren’t fully accountable to, say, a police chief or an elected sheriff. Moreover, they’re often funded either with additional Byrne grants, or with money seized in asset forfeiture proceedings. They can operate with little or no funding from the polities they police.

Johnson noted that the Department of Justice’s Assets Forfeiture Fund (AFF) reached $1.8 billion for fiscal year 2011 during the Obama administration, $445 million of which was transferred to state and local governments via the AFF’s “equitable sharing payments.” The AFF was valued at $1.5 billion and $1.4 billion for fiscal years 2019 and 2018, respectively.

Johnson stated, “George W. Bush started to phase out the program so that you would not be having local governments setting up these [police] task forces where they were incentivized to use them because the more you use them, the better stats you’ve got, [and] the more money you would get.”

Johnson continued, “This was one of Biden’s favorite programs. Biden loved it. Biden could not get enough of the Byrne grants. So in the 2009 American Recovery and Reinvestment Act, they issued $2 billion for the Byrne grants. Now, because this money is fungible, a lot of local offices took that money and started a lot of these new SWAT teams. … That’s how most of these things were financed. They were not in place until they were able to use these grants to set them up.”

“This was one of Biden’s favorite programs,” added Johnson. “He even bragged about creating the program, saying that that was one of the reasons that crime rates fell in America when he was in Congress. In 2009, all of that was increased by 250 percent. So all this mess that Biden is talking about — not militarizing the police officers and local governments — he was one of the main reasons that these programs were financed so heavily throughout the Obama administration.”

Johnson stated, “[Joe Biden] helped to arm them with billions of dollars and then turned around when they actually used that equipment against the public and said that they shouldn’t use it. Joe Biden is doing the exact same thing now, and Republicans are not pointing that out and making that clear. … That is and what Joe Biden has always been, and he will be that on steroids if he becomes president.”

“They have militarized local governments in a way that was never designed for our system,” warned Johnson. “And because of the money that is being allocated [by] the federal government that says, ‘If you continue on these programs, we will give you more funding through grants,’ you are continuing to see more and more lethal force being incorporated into local policing.”

Johnson concluded, “You should not be letting the architect of these ideas go unscathed. Hold [Biden] accountable for the fact that just under the Obama administration, he thought that it was just fine and dandy to spread this money out to local police forces and not to have an eye on it. It made him feel like he was being tough on crime when all it actually did was militarize the police.”

← Pennsylvania Poll: Biden Leads Trump by Five Points Barr: There ‘Is a Widespread Phenomenon’ of African Americans Being Treated with ‘Extra Suspicion’ by Police →