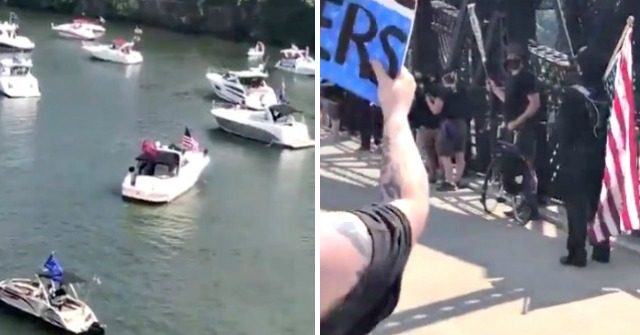 Protesters gathered Saturday to object to a boat parade held in celebration of Independence Day and President Trump in Pittsburgh, Pennsylvania.

Boaters with Trump Team PA and Women for Trump were scheduled to begin the rally at 11:00 a.m. below the Hot Metal Bridge on the Monongahela River and eventually make their way up the Allegheny River, according to CBS Pittsburgh.

However, a local group called Pittsburgh, I Can’t Breathe, organized a counter-protest to the rally and began demonstrating at 10:00 a.m.

“The group calls their event ‘Shut It Down’ in reference to the boat parade,” the CBS article noted.

Protesters have gathered outside the marina where President Trump supporters are gathering for their boat rally. @KDKA pic.twitter.com/zVjAwkd4av

More boats and protesters have gathered. The protest is now on the move. @KDKA pic.twitter.com/MZKx1GsA5V

Later, police officers on the Hot Metal St. Bridge told protesters not to throw objects at the boaters, according to Hoffman:

Police just warned protesters to not throw objects at the boaters. @KDKA pic.twitter.com/sxjf6UJlxz

“Protesters were on the move as of 10:51 a.m. Saturday. They chanted ‘No Justice No Peace,’ ‘No KKK No Fascist USA,’ and ‘Black Lives They Matter Here’ as they marched,” the CBS article noted.

When the group later moved to the North Shore, they reportedly clashed with the Trump supporters and police attempted to create a barricade between them with horses:

Trump supporters and counter protesters are yelling and cursing at each other on the river walk. Still non-violent, but not entirely peaceful as emotions are running high. Avoid the area. https://t.co/oEGZAjmrXk

“As of 1:04 p.m., police had escorted the Trump supporters away from the pier where anti-Trump supporters remain, chanting ‘this is what community looks like.’ Public Safety tweeted that both sides were dispersing from the area as of 1:11 p.m. Saturday,” the report continued.

Trump Team PA Founder Tricia Cunningham said Thursday that over 10,000 people and 283 boats had registered online for the rally, according to TribLIVE.

Despite the Allegheny Health Department’s recent order that prohibited gatherings of more than 25 people and closed bars, restaurants, and casinos for a week, Cunningham said the event would not be canceled.

“We anticipated this. We were still willing to hold it even if we are in the red (coronavirus phase). As long as Donald Trump is president, we are Americans, and we will survive,” she explained, adding that she asked attendees to wear masks and take precautions.

The rally’s Eventbrite page said it was an opportunity for residents to “show our state, country, & President our support in true American spirit celebrating Independence Day with a Patriotic Trump Boat Parade & MAGA Rally & Salute to First Responders.”

← President Trump Lists Those to Be Included in American Heroes Garden Leftists Stomp, Dance on U.S. Flag Outside White House on July 4th →