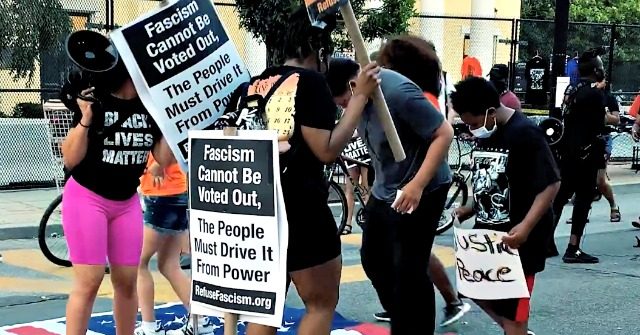 Far-left “anti-fascist” and Black Lives Matters (BLM) activists stomped and danced on the United States flag Saturday as part of a Fourth of July protest in front of the White House in Washington, D.C.

The activists were caught on camera by Breitbart News stomping and dancing the Cha-Cha Slide on the flag. A number of those in attendance appeared to be affiliated with Refuse Fascism, an Antifa group founded in 2017 to combat President Donald Trump’s administration. Others in the crowd were also seen wearing BLM t-shirts and identified themselves as supporters of the cause.

“This flag has hurt so many of us, so come step on this flag,” one of the activists is heard, encouraging protesters to join in denigrating the flag, according to video captured by Breitbart News. “Get [this flag] dirty, that what this flag is, it’s dirty, it represents filth, greed, crime.”

The protest was one of several held across the country by Refuse Fascism, BLM, and other far-left groups. Officially, the activists claim the demonstrations are meant to show opposition to the death of George Floyd and support for tearing down statues and monuments, which they claim are a symbol of America’s racist and fascist history.

This is not the first time either Antifa or BLM activists have engaged in such conduct in front of the White House in recent months. In May, protesters upset over Floyd’s death set several U.S. flags ablaze, while alternatively chanting “hands up, don’t shoot” and obscenities at law enforcement.

As a result of that incident and others like it across the country, Trump floated the idea of sending individuals caught burning the U.S. flag to “jail for a year” at a campaign rally in Tulsa, Oklahoma last month.