Hillary Clinton: 'I Don't Know' If Trump Will Leave Office if Defeated - 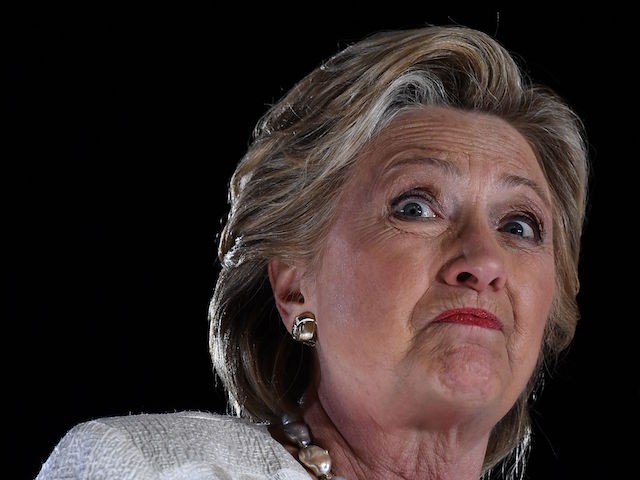 Hillary Clinton said she is unsure if President Trump would leave office without putting up a fight if defeated by Joe Biden (D) in November’s presidential election, making the remarks in a Hollywood Reporter interview published on Friday.

“I don’t know the answer to that yet,” Clinton said in response to a Hollywood Reporter question asking if Trump would leave office “without a fight” in the event of losing the upcoming presidential election.

She said it depends on “how big the loss is” and asserted that it is one of the primary reasons the GOP is rejecting the far-left’s demands for nationwide vote-by-mail.

“That’s why they’re doing everything they can to prevent people from voting — you know, they want to stop mail-in voting, they want to shrink the number of places where people can actually vote in person — because they know if we have a big turnout, they lose,” she told the outlet.

“And so we’re gonna have lots of fights over actual voting procedures between now and November,” she continued. “And if they can do anything that makes it look questionable, they will.”

“And that’s why everybody needs to come out and vote — I don’t care where you live — and have as big a turnout as possible so that there can’t be any excuse given,” Clinton added.

The left has seized on the fears surrounding the coronavirus pandemic, attempting to use it to push their agenda of instituting vote-by-mail, which critics point out increases the possibility of voter fraud, as was recently seen in New Jersey.

Despite the widespread pleas from the left, recent data fails to show a compelling public health justification for vote-by-mail, as seen in Wisconsin. The Badger State held its in-person primary April 7. Out of over 400,000 voters, only a few dozen people who participated in the election as either poll workers or voters contracted the coronavirus, equalling an infection rate below two-hundredths of one percent. Furthermore, some of those who tested positive indicated other ways they were possibly exposed, meaning the infection rate could be even lower.

President Trump has warned against vote-by-mail, stating that it will lead to the “most corrupt Election is USA history.”

Absentee Ballots are fine. A person has to go through a process to get and use them. Mail-In Voting, on the other hand, will lead to the most corrupt Election is USA history. Bad things happen with Mail-Ins. Just look at Special Election in Patterson, N.J. 19% of Ballots a FRAUD!