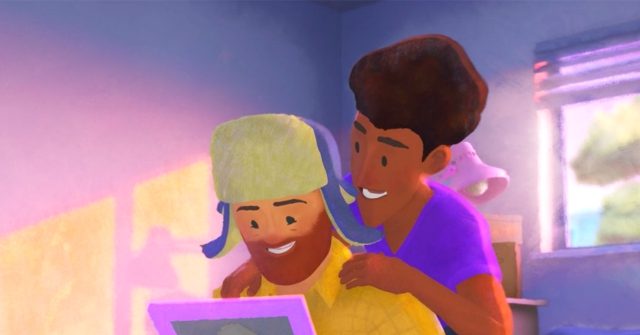 Disney-owned Pixar Animation Studios has unveiled its first-ever gay main character in a short Disney Plus film called Out.

Pixar has introduced its first-ever openly gay main character, which it released through Disney Plus’s SparkShorts series on Friday. The film features a man named Greg who is having trouble coming out to his parents, until a pair of fairy god-pets descend upon earth from a rainbow and swap Greg’s body with his dog’s. Now Greg has the ability to eavesdrop on his parents in the form of a dog.

Watch the trailer below:

Soon after swapping bodies with his dog, Greg frantically runs around the house trying to hide any and all evidence that he is gay — such as his male model calendar and a framed photograph of him with his boyfriend Manuel sharing a hot cocoa.

Later, Greg ends up sitting with his mother in the front yard while she vents to the dog — who is actually Greg — about how she hopes that her son can eventually find someone, adding that she also hopes he will make him happy. So, Greg’s mother knows Greg is gay after all.

After realizing that his mother has been privy to his homosexuality all along, Greg finds a way to get back into his own body, and later introduces his parents to Manuel while the fairy god-pets watch in the distance before ascending back into the sky on their rainbow.

Out was written and directed by Steven Clay Hunter and produced by Max Sachar. Earlier this year, Pixar’s Onward became the first feature film to include a gay character in the form of Lena Waithe’s cyclops cop Officer Spector.